I was invited to attend the Artivistas symposium by Balmaceda Arte Joven (BAJ) in Santiago together with my Artswork colleague, Jane Bryant in August 2017. Thanks to support from Arts Council England (ACE), the Anglo-Chilean Society, BAJ and Creative Europe, I presented both on the work of The Mighty Creatives and the project, Risk Change: a programme designed to address the social and cultural challenges faced by migrants and the receiving communities they are settling in across Europe.

Risk Change is a 4 year programme involving 10 European partners that connects new migrants and host communities in order to improve cross community understanding. The presentation focused on the challenges and successes of the programme and offered early, tentative policy improvements for regional and national policy makers and is available upon request.

I’m reminded from the off that travel can be the height of foolishness when I think I’m about to collapse on the second leg of the flight from the UK to Chile; probably due to forgetting to eat before an over enthusiastic beer consumption in one of those timeless bars in Heathrow. Happily, there was a GP on the flight who instructed me to put my legs up in the air and wave my arms about like a flailing air traffic controller and before too long the colour had returned to my cheeks, I could sit up straight and look my neighbour in the eye and ask what all the fuss was about.

I was struck later as we disembarked in Santiago about how friendly and concerned some of the homeward bound travellers had been. Lots of anxious phrases rattled off in the fastest Spanish I’d ever heard and a few thumbs up when I thanked them and said I was absolutely muy bueno, gracias. I may have forgotten my Spanish dictionary dammit but apps these days mean it’s possible to wrap your tongue around any kind of phrase at a moment’s notice.

As we drive from the airport into Santiago I’m reminded of all sorts: and it occurs to me that this kind of travelling – visiting artists and educators in faraway places on a mission to understand what we have in common and what differentiates us – is not only about encountering new sights and sounds but also remembering old sights and sounds too: not necessarily in the place you’re visiting, but in the places you’ve been and would rather not have been. It’s not just about meeting new people, but about reacquainting yourself with people you thought you had left behind.

There’s a lot of familiarity in some new places – much too much for one’s liking sometimes. You’re reminded at the Museum of Memories in Santiago for example, that the civil war the museum depicts has elements of it which aren’t so far apart from our own recent experience of democracy in the UK. The Brexit vote for example, with its story of 52:48 was suspiciously like the 52:43 vote in the Chilean democracy election. You can’t help but wonder if the Chilean vote was such a comprehensive indictment of Pinochet as everyone is claiming it was: until you hear how the NO vote was blocked from advertising itself in the first place; and how it was censored and moved around the TV schedules in an attempt to disrupt the opposition.

Given that the word ‘NO’ hardly presents itself as a positive force for change, you realise again that numbers never tell the full story but are merely a snapshot and certainly don’t tell you about the process that led to that output or the bigger story behind it. We might take our own desire to measure education – and measure it again and again and again – with a higher degree of scepticism if we remembered what 43:52 actually meant during the end of the Pinochet regime. 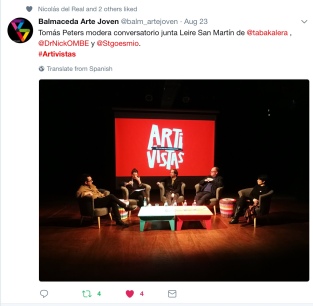 Going abroad is not so much taking yourself away – but as Alain de Boton reminds us in The Art of Travel – is more about taking yourself with you wherever you go. So, if you find local people cheerful and accommodating, perhaps that’s because you’ve been accommodating and cheerful in the first place. Perhaps if you find the locals irascible and not to be trusted, it’s because the first things you’ve unpacked from your suitcase are your own bad temper and possessive inquisitiveness which can’t keep its hands off other people’s goods.

‘Gringo go home’ was never too far away in the foothills of the Andes, and on the first day at the Balmaceda Arte Joven programme, we forcefully encounter the work of the Argentinian collective, FACC (Fuerza artistica de choque comunicativo) – and yes, it sounds just like that old Anglo Saxon expletive – an anonymous collective which ‘uses any means necessary against political violence‘. The images of their work are powerful, disturbing and also aesthetically thrilling, reminding you that our agit prop tradition sometimes got lost in its earnestness and its forgetfulness of the power of live theatre.

And that’s another thing we’re reminded of in those early seminars with Balmaceda. Artists, managers and educators still talk convincingly about the power of the arts: of arts for arts sake, not for some instrumental purpose, not as some device which gets you sat in the seats of power as Ken Robinson did so successfully in the late 1990s with his positioning of arts education within the larger rhetorical cloak of creativity. “Arts for Arts Sake” still resonates powerfully here: particularly when you realise that it’s one thing we hardly ever do as an Arts Council Bridge organisation – talk about the arts.

We talk about creativity, about infrastructure, about KPIs, about outcomes, about outputs, about milestones and about gross value added. We talk constantly about investment and progression routes and return on investment. We talk incessantly about partnerships and collaborations and going forward: but looking back, we never ever seem to talk about the arts – and what it is about the arts which makes the difference in the classroom when an artist is faced with a whole classroom gaze of dis-spirited Year 9s on a wet Wednesday afternoon who can’t wait to get out of school and get on with the things that really matter – their own culture.

The Andes are never far away in Santiago and the view from the British Council offices are perhaps some of the best in the world if you need something to inspire you to think about cross border cultural exchange, something we started work on with Balmaceda during our brief time with them in Chile and which will continue into the Autumn of the East Midlands and South East UK.

At night, the stars in Santiago become a completely different proposition to the ones you might be able to pick out on the top of a hill on a foggy November night in Colwick Woods in Nottingham. The stars in Santiago remind you that the Milky Way allegedly produces about 3 new stars per year. If we work on the basis that there are about 100 billion galaxies in the observable Universe, this means that there are about 275 million stars being born every day.

That’s a lot of outcomes and is another reminder of the outcomes of artists with teachers and young people: they are always countless – predictable, unpredictable, surprising and challenging – which might be spotted briefly on the horizon but will never be completely captured given the nature of the work we are doing. We sometimes seem to confuse the tip of the iceberg with the iceberg itself and this has its own set of unintended and unexpected consequences. 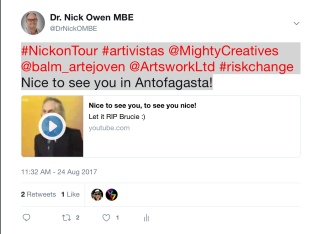 Up in Antofagasta in the north of the country I present on the work of Risk Change, the TMC Creative Europe programme which is focused on how the arts contribute to community cohesion.

One way I’ve found of engaging new overseas audiences is to introduce them to some British light entertainers. A few years ago, in Oman, I was able to use the Billy Cotton call – Wakey, Wakey! to kick start a discussion about the need for the public sector change – but in the Chilean case, I drew on the work of Bruce Forsyth who had passed away earlier in the month.

Thanks to the omnipresent YouTube, I showed my audience some of the opening credits of the Generation Game of the early 1070s when I’m reminded of me and my dad’s attempt to get on to the show – albeit without success. But no matter: the clip worked well, with the Latin audience also offering an attempt to join in with the Spanish Brucie equivalent, Es bueno verlos: verlos, bueno!

I’m also reminded that I hate enforced participation games – something which stemmed from my trousers splitting in Gorleston Holiday Camp in Norfolk back in 1971 when my dad ran the camp there and we were encouraged to join in with the Hokey Cokey one wet Wednesday afternoon. On putting my left foot out, my trouser bottoms decided to cave in and before you know it, there’s a huge wave of embarrassment spreading out from my general direction and I try and beat a backward walking retreat, not knowing where to look or what to do or where to go.

I vowed never to do anything like that ever again – and then 20 years later headed into the field of Community Arts where putting your left foot in and shaking it all about were the essential prerequisites for a meaningful engagement experience. So much for the teenager oath.

My presentation takes place in BAJ’s centre in the suitably titled Fundación Minera Escondida, where there’s also a photographic exhibition about southern Chile and the effects of global warming. The exhibition consists of photographs of an iceberg painting being dragged around on a small boat. The photo of the ‘berg reflecting on the floor reminds you there is always something hidden under the surface – which is as true in the wasteland to the north of the city which leads into the desert, as it is of the oceans south of Tierra del Fuego.

Early the next day we drive through the wasteland to see apparently nothing but the detritus of dead trains and miles upon miles of rubber tyres and soil tips which tell you there are riches under the surface which we can only imagine: unless you happen to be a mining engineer when you’ll know all about what’s under the surface and how to get things out of it.

There’s a night and day (not sure which way around at this point, but that could just be the magical realism tradition of Latin America finally kicking in) of Suspiro limeño and its other intoxicants: Peruvian Girl Sigh; Inspira; Zombie Pride and Prejudice; and Cueca out in the suburbs and out in the desert, the deserted nitrate mining town of Chacabuca over which the haunted tunes of Lucha Reyes float across her desolate landscape.

I’m reminded of my first father-in-law, a German mining engineer who travelled to Colombia after the second world war, my first marriage and what was under the surface then: and this reminds me of past and future love gained, lost, forgotten, surrendered and remembered.

International travel might well be the height of foolishness but my trip to Balmaceda Arte Joven in Chile served to remind me that learning is not just about acquiring new knowledge, skills and experiences but also remembering the ones you’ve had – and which may take over 40 years to learn about the consequences of the teaching moments that evaporated in the heat of your youth.